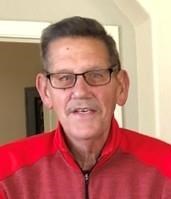 Chuck was a quiet spoken man but had an incredible servant heart for the people around him. Nothing topped his love for Jesus or his family. He was an avid golfer and a die-hard Ohio State and Pittsburgh Steeler fan. He was also a caretaker of the greenest yard around.

Chuck was a High School graduate from Warren Consolidated High School. He moved to Colorado Springs in 1977. Shortly after, he began a 31-year career with Lane Sales Pepsi. He finished his career in 2009 as the Director of Sales and Food Services. In retirement, he worked as a Starter/Marshall at The Broadmoor Golf Club.

A Celebration of Life ceremony and reception will be held Saturday, November 27, 2021, from 2:00pm – 5:00pm at The Country Club at Woodmoor, 18945 Pebble Beach Way, Monument, Colorado 80132. In honor of Chuck, dress will be casual. Please wear your favorite golf polo or sports team jersey or shirt.

In Lieu of flowers, memorial donations may be made to Compassion International at Compassion.com or Rocky Mountain Calvary Chapel 4285 N. Academy BLVD., Colorado Springs, Colorado 80918.

Published by The Gazette on Nov. 23, 2021.
To plant trees in memory, please visit the Sympathy Store.
MEMORIAL EVENTS
Nov
27
Service
2:00p.m. - 5:00p.m.
The Country Club at Woodmoor
18945 Pebble Beach Way, Monument, CO
MAKE A DONATION
MEMORIES & CONDOLENCES
6 Entries
I am so sorry for your loss. I have many great memories of him from my childhood years.His family was our neighbors on the corner. His oldest son Chad and myself were great friends growing up. I've known Mr.Smith and his family for years. He will truly be missed. Rest in peace .
Monica Morgan-Neville
Friend
November 28, 2021
In loving memory of a wonderful person. I will love you and miss you always.
Janet Smith
Family
November 27, 2021
May God bless you and your family in this time of sorrow.
Mam
November 27, 2021
Our sympathy. Mike & Sue Hesse, Kile Hesse family, Kristina Gresham family & Keri Hesse.
Sue Hesse
November 23, 2021
Chuck was my uncle - a kind hearted, humble person. Our world lost another hero, but we can continue to learn to be a little more humble and kind hearted, to continue to make this world a better place, as he did. My heart is crushed for everyone that knew him.
Debra Floyd-Lastovica
Family
November 23, 2021
Dear Smith family, I am very sorry to hear of Chuck passing. I also enjoyed seeing his yard when you all lived on Palmer Park. He always took such care. Im so glad to have gotten to know all of you while my time with Dr. Doolittle. Peace and Prayers for you all
Karen Brady
Friend
November 23, 2021
Showing 1 - 6 of 6 results