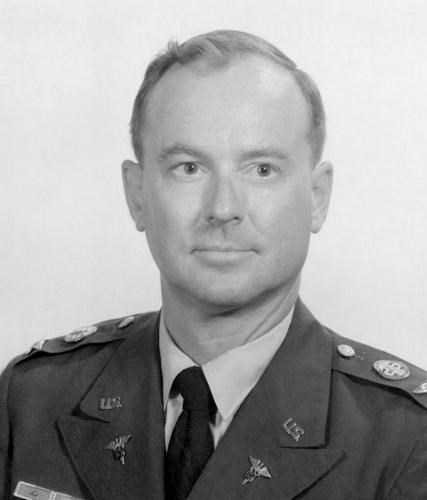 FUNERAL HOME
Shrine of Remembrance
1730 East Fountain Blvd.
Colorado Springs, CO
COL Gerald D. Allgood (USARet.) passed away on July 5, 2014. He was a resident of Colorado Springs for 28 years. The Army took him to many different destinations around the world. He was a Colonel in the U.S. Army. He retired as Chief of Staff of Health Services Command.

Jerry loved Oklahoma State Football, fishing and hunting. He was proud of his Indian heritage and time growing up on an Indian reservation. The tribe named him Yellow Bird for his blonde hair and later Slug because he would fight to survive! He attended Altus High School and graduated from Oklahoma A&M (now OSU) in 1956. He proudly served in the United States Army for 30+ years. Jerry was instrumental in renaming a portion of Highway 115 to the Vietnam Veterans Memorial Highway and with establishing the new National Cemetery to be in the Colorado Springs area.

A memorial service will be held at 10:00 am on Thursday, July 10th at Shrine of Remembrance, 1730 E. Fountain Blvd. A reception will be held immediately following the service at Olympian Plaza Reception and Event Center, 975 South Union Boulevard.

Memorials in Gerald D. Allgood's name may be made to the Shriner's Hospital or to the Army Medical Museum at Fort Sam Houston.

To plant trees in memory, please visit our Sympathy Store.
Published by The Gazette on Jul. 8, 2014.
MEMORIAL EVENTS
No memorial events are currently scheduled.
To offer your sympathy during this difficult time, you can now have memorial trees planted in a National Forest in memory of your loved one.
Funeral services provided by:
Shrine of Remembrance
MEMORIES & CONDOLENCES
18 Entries
Few days go by that I don't recall some event involving Jerry Allgood. Such a good and trusted friend. How I miss him. May he rest in peace.
James Van Straten
Friend
July 2, 2020
Dear Cleo and family,
Few days go by that my thoughts don't reach out to Jerry and Cleo Allgood and the wonderful year we shared as neighbors at Fort Leavenworth, Kansas. Those were very special days. Jerry and I became close friends during that year, 48-years ago, and remained so until Jerry's death five years ago. He had a special, mirthful spirit about him and I miss him greatly. I am so grateful for our continuing friendship with you, Cleo. Blessings to you and your wonderful family.
Jim Van Straten
James Van Straten
Friend
July 2, 2019
Dear Cleo and Family: You all are in our thoughts and prayers during this very sad time. We hope the good memories you have will help to get you through this very difficult time!
Love, Brenda and Johnny Conner, San Antonio , TX
July 12, 2014
Dear Cleo and Family,

It was with profound sadness that we received word that Jerry had died. As you know, we've been good and trusted friends since first meeting the Allgood family over forty years ago at Ft. Leavenworth, Kansas. Think of all the good times we shared: Going over the cliff in your car in the mountains of Colorado with snow sleds and winter gear flying inside the car; mentoring and entertaining the Laotian officers during the Command and General Staff College; flying to Colorado Springs to visit a time-share and then undergoing hours of high pressure sales pitches before we could get away; introducing you at the Officers' Club as Miss North Dakota and having it misunderstood by an inebriated officer as Miss Nova Scotia; watching our neighbor's dog destroy the steaks he had put on the hibachi grill. I could go on and on listing the memories we share.

I know the loss of your beloved husband, father, father-in-law and grandfather will be felt for a long time. But the good memories survive. Think of the good times.

Jim and Pat Van Straten
July 10, 2014
A great friend, great boss and great soldier.
Ron and Verna Newman
July 9, 2014
A great man has left us to be with God. The Allgood's have given the USA so much. Proud to have known them. I am a Sooner with nothing but love for the Allgoods.
John Orendorff
July 9, 2014
So sorry for your loss.His life of service is deeply appreciated.
Deborah Langford-Cross
July 9, 2014
The Allgood family is in our prayers. We have the privilege to know Brad, Paula and the kids. He has left a beautiful legacy behind that we cherish. Our prayers are with you at this time.
Luis, Veronica & kids Marques
July 9, 2014
Dear Cleo and Family,
Words can not express my feelings of loss when I read of Jerry's death. He was my best friend in the Military since 1966 and had tremendous influence on my military career. I will always remember his optimism and his sense of humor with an unforgettable laugh. Gerry was an outstanding officer and dedicated leader of The Army Medical Department. Our thoughts and prayers are with you and your family.
Ed and Doris Brannock
July 9, 2014
Allgood Family, We're sending our deepest, heartfelt sympathy for your loss. Jerry was an incredible person and Kurt truly enjoyed working with him at EACH and simply sitting and talking with him. Your entire Family is in our thoughts and prayers.
Kurt and Jill Gustafson
July 9, 2014
Cleo and family;
I was truly saddened to learn of jerry's passing, and Ann and I want to extend our heartfelt condolences to you. I have nothing but the fondest memories of working with Jerry. There are many stories we could share, bur rest assured he was respected as a leader by example and one who will always have a special place in our military memories.
Jim and Ann Dolbier
July 8, 2014
It is exceptionally sad to learn of Jerry's passing - I hold very fond memories of having the privilege of working with Jerry while we was the Chief of Staff, Health Services Command. He will be very missed; however, he leaves a phenomenal legacy of service, dedication and quest to mentor younger officers in their careers - I pray others will follow his great lead in the future. Jerry will always be a great man in my life ....

LTC (ret) Don Krieger
Don Krieger
July 8, 2014
We are sending our deepest condolences to your family. Gerry was a fine officer,
a gentleman and friend. He will be missed by all. God Bless.
Tom & Patti Jackson
July 8, 2014
God Bless this wonderful man who mentored many young officers. His journey through life had a very positive impact on those around him. Thanks Gerry!
Bernie Gore
July 8, 2014
In honor of our friend, colleague, mentor and great patriot our prayers are with you and your family,

Ray and Bobbie Leahey
Ray Leahey
July 8, 2014
Dear Cleo; Are heartfelt condolences on the passing of Jerry. You are in out prayers. Jack & Jean Leone
July 8, 2014
Brad and Family

My heartfelt condolences to you and your family. I will keep all of you in my prayers.
Rachelle Hughey
July 8, 2014
We know it is so very difficult to lose a Spouse, Father, Grandparent and family member. Our hope is that after a time, all the good memories will help each of you through the difficult times! Our thoughts and prayers will be of you all during these difficult times, Love, Brenda and Johnny Conner
Brenda&Johnny Conner
July 8, 2014
Showing 1 - 18 of 18 results