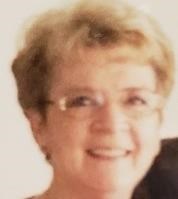 Juliana Rose Skelly-DeBonis, age 87, died on Wednesday, February 3, 2021 at Forest Ridge Senior Living, Woodland Park, CO. She was born in Danbury, CT on May 4, 1933. She married Michael Paul DeBonis of Danbury on November 21, 1953. Michael entered the Air Force and served in the military from 1953-1974. During that period, they traveled to different assignments and ended up in the Colorado Springs area where they spent most of the last 55 years of life. She worked for 25 years at Sears, Roebuck & CO credit department where she made numerous life-long friends. She spent another 12+ years working in various retail stores, e.g. florist and gift shops and for her daughter, Mary, where she worked as Salon manager. She loved people and would treat them like they were her family. Julie spent the last 4 years of life at Forest Ridge where she was loved by so many nurses and caregivers. Julie is survived by children: Vincent & spouse, Venola; Paul(Michael P, Jr), and spouse, Bobbi; and Mary DeBonis-Davenport and spouse, Jon; six grandchildren and three great-grandchildren. She is also survived by siblings, John Skelly, Kathleen Mazinski and Michael Skelly. Juliana was preceded in death by husband Michael, siblings: Margaret Wahlstrom, Stephen, Charles, Walter Skelly and mother Madeline R. Reilliss-Skelly. Juliana's funeral rosary and Mass was held on Feb. 16 at Our Lady of the Woods Catholic Church, Woodland Park, CO.

Published by The Gazette on Nov. 21, 2021.
To plant trees in memory, please visit the Sympathy Store.
MEMORIAL EVENTS
To offer your sympathy during this difficult time, you can now have memorial trees planted in a National Forest in memory of your loved one.
Funeral services provided by:
All Veterans Funeral & Cremation - Colorado Springs
MAKE A DONATION
MEMORIES & CONDOLENCES
0 Entries
Be the first to post a memory or condolences.