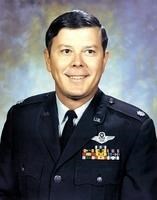 Colonel Lyndon L. Sheldon (USAF retired), 90, of Colorado Springs, passed away on January 1, 2022, in memory care at MacKenzie Place. Lyn was born to Molly and Glen Sheldon at home on the farm in Mt. Ayr, IA, and was welcomed by his 11 siblings. The family moved to Des Moines when he was 10 after the death of his father.

He attended Iowa State University where he received a BS degree in mathematics and received a commission as a 2nd Lt. in the USAF through ROTC. Lyn met Edie Gossner in Mrs. Riley's boarding house in Dubuque, IA, where she was a student in the X-ray school at Mercy Hospital. They were married on December 26, 1955, in her home town of Darlington, WI.

They were stationed in Texas and Georgia for Lyn's navigation training. Their daughter Peggy was born in Valdosta, GA, and her sister Lisa was born in Presque Isle, ME, where Lyn flew in F-89s in the Fighter Interceptor Squadron (FIS), protecting the US from Soviet aircraft. In 1959, the family moved to Columbus, OH, where 2 years later Lyn earned his Master's degree from Ohio State University in geodetic science. From 1961-64, Lyn was assigned to Hanscom Air Force Base (AFB) in Massachusetts, where he was a Geodetic Research Officer on the geodetic satellite program at Cambridge Labs and the team earned a patent for the ANNA-B satellite. Lyn's next assignment took the family to Charleston AFB, SC, for Lyn's role as a Radar Intercept Officer in F-101B Voodoos until 1967. Lyn served as a mathematician at HQ Air Defense Command (ADC) in Colorado Springs through 1969. Then Lyn was deployed as an instructor navigator in AC-119K Stinger gunships on 137 night combat missions in Vietnam and Laos. After 6 months Lyn took R & R in Hawaii, meeting Edie and the girls for a wonderful week on the beach.

Lyn retired from the Air Force in 1981 after serving his country for 27 years. He worked on USAF programs in Colorado Springs for NORAD while employed by Computer Science Corp., Ford Aerospace, Loral and Lockheed Martin until 1996.

Lyn drove for Meals on Wheels for many years and was a Grand Friend, tutoring 2nd graders in reading at Grant Elementary School. He was an enthusiastic member of the Charles A. Lindbergh Collector's Society for over 10 years, even serving as the group's president. In addition, he enjoyed spending time with our Miniature Schnauzer Fritz, refinishing antiques, fishing, Sheldon family reunions in Lake City, CO, reading, and visiting ghost towns in the Land Rover.

Lyn is survived by his loving wife Edie of 66 years, his daughters Peggy Ritchey (Steve) and Lisa Sheldon, his sisters-in-law Rita Purcell and Charlotte Sheldon, and many nieces and nephews.

He is predeceased by his parents, 7 brothers and 4 sisters.

A private burial will be held with full military honors at the Pikes Peak National Cemetery.

The family wishes to thank the wonderful staff in memory care at MacKenzie Place as well at the New Century Hospice nurses who were so kind, especially at the end.

A celebration of life will be held Saturday, February 5 at the Shrine of Remembrance (1730 E. Fountain Blvd, C. Springs) at 1 p.m. Due to the pandemic, masks are required.

Published by The Gazette on Jan. 16, 2022.
To plant trees in memory, please visit the Sympathy Store.
MEMORIAL EVENTS
Feb
5
Celebration of Life
1:00p.m.
Shrine of Remembrance
1730 E. Fountain Blvd, Colorado Springs, CO
Funeral services provided by:
Shrine of Remembrance
MAKE A DONATION
Please consider a donation as requested by the family.
MEMORIES & CONDOLENCES
1 Entry
The Buckley SFB military Retiree Activities Office (RAO) would like to offer our sincere condolences and our gratitude for Col Sheldon's 27 years of distinguished service to our country in the Air Force. If you would like help with any matters related to casualty assistance, Defense Finance & Accounting Service, Survivor Benefit Plan (SBP), Veterans Affairs (VA), etc. you can contact our office on Buckley SFB at 720-847-6693. The RAO is staffed by volunteers, all military retirees themselves, and our sole purpose is to provide assistance to any military retirees and surviving spouses/family members with anything related to their military service and/or benefits, in particular during difficult times such as this. We are deeply sorry for your loss. Steve Young Lt Col, USAF, Ret Director, Buckley SFB RAO
Steve Young
January 12, 2022
Showing 1 - 1 of 1 results