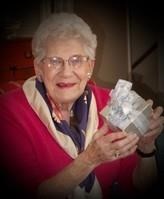 Nicole (Delattre-Seguy) Paulson died peacefully on July 6, 2021, surrounded by loving family and friends. At the magnificent age of 95 1/2, she has earned her rest.

Nicole was born in San Francisco on December 8, 1925 to Jean and Jeanne (Searles) Delattre-Seguy, the 2nd of 3 girls. Her older sister Yvette Clark predeceased her; her younger sister Claire den Hartog Watts survives her.

With her French father and American mother, she lived in several cities across the U.S. and Europe. The family moved to France when she was 9. She attended private schools in Madeira Island (Portugal), Paris (France) and Lausanne (Switzerland). Her mother and the three girls fled Europe in September 1939 on the same ship that picked up survivors of the Athenia. Growing up with rather privileged children, she was a lady of class and was always proper.

She met Roland Paulson at the CIA (OSS) in Washington, DC. They were married for 56 years until Rollie's death in 2013. They raised 4 children: Edward Bartlett, Cris Paulson, Lisa Bradley Godward and Eric Paulson survive her.

Nicole was self-employed for many years, mostly revolving around her enduring love of photography, both professional and personal. Her greatest joy was seeing the world's beauty and capturing it with her camera. Whether the subtle colors of Grand Canyon, the lights of the Eiffel Tower, or the cream stone of Bath Abbey in England, she saw the world through a photographer's eyes.

Her spirit brightened when talking about travel. As soon as she recovered from the jet lag of a major trip, she started planning another adventure. She visited most of the major cities in the U.S. and Europe, Russia and China. However, she insisted, "My heart is French."

Despite her many successes, she was unassuming. She scoffed at the idea, but people who knew her often said she was inspiring. She was hard-working, determined and creative; she set a high standard for everyone around her with her actions. She had a wicked cross-court forehand, a quick sense of humor, and a child-like sense of wonder. In her mind, the secret to a long life was "Just keep moving!" She had no tolerance for complainers; "Do something about it!" would be her parting words.

Nicole wrote 4 genealogy books for her children, her 7 grandsons and 2 great-grandsons. She was a prolific needlepointer, knitter, and tailor, each piece more intricate and beautiful than the last, often with a touch of whimsy. She enjoyed being outdoors, especially seeing the lovely flower garden she created with her own hands over the years. She was a lifelong patron of the arts, whether ballet, classical music, the Santa Fe Opera or photography exhibits.

Her Celebration of Life will be Tuesday July 20th at 10:30 am, at Grace Episcopal Church on 631 N. Tejon St., Colorado Springs. In lieu of flowers, she requested that donations be made to the Grace Church Windows Repair Fund.

Published by The Gazette from Jul. 16 to Jul. 18, 2021.
To plant trees in memory, please visit the Sympathy Store.
MEMORIAL EVENTS
Jul
20
Celebration of Life
10:30a.m.
Grace Episcopal Church
631 N. Tejon St, Colorado Springs, CO
Funeral services provided by:
Swan-Law Funeral Directors
MAKE A DONATION
MEMORIES & CONDOLENCES
4 Entries
I didn't personally know Nichole, but she was one of my mom's "tennis girls" and my mom spoke of her glowingly. They knew each other for many years and Nichole's passing has been difficult for my Mom (Jeanie Reinhard). I certainly can confirm that Nichole was "inspiring" and she will be sorely missed by her "girls".
Chip Reinhard
Friend
July 20, 2021
Eric - So sorry to hear about your mom´s passing. Sending prayers and healing for your family.
Dr. Cynthia Armstrong
Other
July 17, 2021
A very classy lady and wonderful friend who made the world a better place. Thanks
Dewey & Jeanie
Friend
July 17, 2021
Such a Great lady & Wonderful tennis friend! She will be missed!
Jill Schilling
Friend
July 16, 2021
Showing 1 - 4 of 4 results