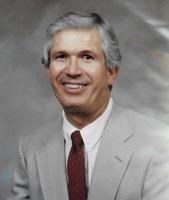 Robert LaRoy Coutts died peacefully at home on August 1, 2021, at the age of 92. He was born November 5, 1928, to Anita Morrison Coutts and Hazen Coutts. Bob was raised in Antelope County, Nebraska and graduated from Fremont High School. He received his B.S., M.S. and Ph.D. from Florida State University. Bob taught at colleges and universities before establishing a private practice in Colorado Springs as a neuropsychologist in 1978, retiring in 1998. He was a long-time member of St. Paul's United Methodist Church. Bob's greatest joys in life included his wife Mary, their children, grandchildren and great grandchildren, his profession, golf and competitive running.

A memorial service will be held at St. Paul's United Methodist Church, 2111 Carlton Avenue, Colorado Springs, on August 28 at 2 p.m. A reception will follow. In lieu of flowers, memorial donations can be made to Home Front Military Network, 1120 N. Circle Drive, Suite 230, Colorado Springs 80909 and/or St. Paul's United Methodist Church Children and Youth Ministries, 2111 Carlton Avenue, Colorado Springs 80909.
Published by The Gazette from Aug. 3 to Aug. 26, 2021.
To plant trees in memory, please visit the Sympathy Store.
MEMORIAL EVENTS
Aug
28
Memorial service
2:00p.m.
St. Paul's United Methodist Church
2111 Carlton Avenue, Colorado Springs, CO
MAKE A DONATION
MEMORIES & CONDOLENCES
4 Entries
I only knew Bob for a few years as a fellow golfer on our Argonaut golf league, but his infectious smile and good nature made him such a pleasure to play with. It was a good day when Bob was on your foursome. Bob was a gracious gentleman. I pray that when I reach his age I will be as pleasant and wise in my fellowship with others as he was. Bob will be greatly missed.
John Torrez
Friend
August 28, 2021
Bob was always upbeat and happy. A joy to be with. He seemed to always have a giggle or laugh trying to get out.
Matt Grumann
August 21, 2021
Bob will surely be missed by the Argonauts. He was gentleman always.
Jim Dennison
Friend
August 4, 2021
Our hearts go out to Mary and family at this time of loss. As a colleague and friend, Bob was an inspiration on many levels. We loved his sense of humor, his intelligence and love of learning, his devotion to helping others, and his dedication to family and high ideals. We will miss him. Keeping Mary and family in our thoughts and prayers
Sharon Brunink and Tony Ricci
Friend
August 3, 2021
Showing 1 - 4 of 4 results