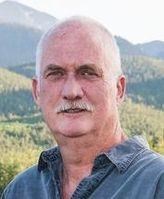 Robert "Bob" Dean Stover went home to be with the Lord on Sunday, 14 November 2021. He was 68 years old. Bob was a longtime resident of Fountain, Colorado before retiring to Westcliffe, Colorado in 2014. Bob was born to Jim and Joan Stover on August 25, 1953 at Port Hueneme, California.

Bob was pre-deceased by his father and his son, Lee. Bob is survived by his bride of 47 years, Teri; their children, Ryan and Luke; daughters-in-law Leanne and Caroline, seven grandchildren; mother; brother, Dennis; and sisters, Susan and Denise.

Bob was raised in Southern California. It was here that he met Teri while working as a grocery store clerk. Shortly thereafter he joined the United States Navy, serving as a submarine tender in San Diego, California for four years. Following the Navy, Bob and Teri relocated to Colorado to build a life together. Originally settling in Woodland Park, the family moved to Fountain to start an auto salvage business in Colorado Springs. For 28 years, Bob pursued his lifelong passion of working on cars as the owner and operator of AJ Salvage, Inc.

Upon retirement, Bob and Teri moved to Westcliffe in order to spend more time with their grandchildren. He thoroughly enjoyed the community and small-town life of Custer County.

A celebration of life service is scheduled for early Summer, 2022.

Published by The Gazette on Nov. 20, 2021.
To plant trees in memory, please visit the Sympathy Store.
MEMORIAL EVENTS
To offer your sympathy during this difficult time, you can now have memorial trees planted in a National Forest in memory of your loved one.
MAKE A DONATION
MEMORIES & CONDOLENCES
2 Entries
Sure do miss you bro. You were taken way too early.
Dennis Stover
Family
November 17, 2021
Bob was a knight in shining armour, brave and a protector for those he loved. He will be greatly missed. May my dear Cousin rest in peace with our Lord. He will be loved and remembered always.
DEBRA l SHIDLER
Family
November 17, 2021
Showing 1 - 2 of 2 results