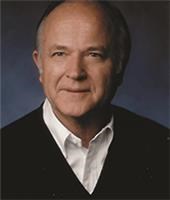 BORN
1928
DIED
2020
FUNERAL HOME
Swan-Law Funeral Directors
501 North Cascade Avenue
Colorado Springs, CO
THEODORE "TED" JOHNSON
September 9, 1928 December 1, 2020
Theodore "Ted" Johnson, known affectionately to many as TJ, went home to be with the Lord on December 1, 2020 after 92 years of grace-filled living. He was preceded in death by his parents, his wife of 47 and a half years, Nancy, and his eldest brother Don. He is survived by his daughters Gwendy (Bob) and Cindy (Mateen), grandchildren Nicole, Tommy, Ashleigh, Peter, Brittany, Strider and Kendall, and 7 great-grandchildren, and by his wife of 20 years, Huey, as well as her sons Brad (Leslie) and Craig (Kaycee), grandchildren Morgan, Harrison, Kenna and Maddie, and one newborn great-grandchild as I write. He also leaves behind two beloved brothers-in-law, Rabbit (Susan) and William (Sandra) Laughlin.
Ted grasped the important distinction between making a living and making a life. He made a living working for three great companies that have shaped the world: Coca Cola, IBM, and Cryovac (a division of W. R. Grace). Thriving as a sales, marketing and advertising executive, he always kept his eye on serving those who crossed his path. He loved his work.
But even more, Ted excelled at making a life. He trusted Jesus' promise, "I came so they can have real and eternal life, more and better life than they ever dreamed of" (John 10:10). First captivated by Christ at age 7, he grew up with a passion for others to know Jesus as he did. In 1956, soon-to-be lifelong friend Bob Mitchell introduced him to the fledgling mission of Young Life, a ministry dedicated to reaching lost high schoolers. From that point on, Ted became an avid supporter, serving in the SF Bay area as a committee guy. Over the years he rose to serve as the National Committee Chair, and upon retiring from Cryovac in 1990 he and Nancy moved from California to Colorado Springs, where he gave himself heart and soul to full-time work at Young Life's headquarters in a variety of executive positions until his retirement in 2018 at the age of 88. Even then, his mind never ceased churning out ideas for how to reach more teenagers with the gospel. As a result of his work, tens of thousands of scholarships have been and will continue to be provided to teens so they can attend summer camps, where many find their lives forever changed by making a decision to follow Christ.
Those who knew Ted well will remember his most frequently repeated statements: "God's been so good to me;" "We've got a lot to be thankful for;" "If God can use me, He can use anyone;" and "You've got to get deep enough into it to discover the fun of it!" He was an encourager par excellence, and generous to a fault, were that possible. He walked like Jesus.
Ted also declared that when a believer dies, you should throw a party. So at the conclusion of his memorial service (date and time TBD), we will throw a party with ice cream sundaes, his preferred method of celebrating. Until then, please be comforted and encouraged by the last words on his lips: "What a friend we have in Jesus!"

Published by The Gazette on Dec. 6, 2020.
To plant trees in memory, please visit the Sympathy Store.
MEMORIAL EVENTS
To offer your sympathy during this difficult time, you can now have memorial trees planted in a National Forest in memory of your loved one.
Funeral services provided by:
Swan-Law Funeral Directors
MAKE A DONATION
MEMORIES & CONDOLENCES
0 Entries
Be the first to post a memory or condolences.