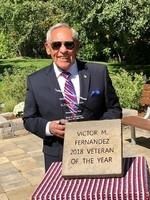 Vic passed away on September 16,2021, at Pikes Peak Hospice, Penrose Hospital, after an 8- month battle with lymphoma cancer.

Vic was born in Trinidad, Colorado, on August 21, 1937, the first of seven children in the family of Valentine and Genevieve Fernandez.

Vic graduated from Holy Trinity Catholic School in 1955, and at age 17 entered West Point, Class of 1959 After graduation he began a3}-year career doing what he loved-serving his country. During his career he served two tours in Panama, two tours in Vietnam, and two tours in Germany. There were also numerous stateside assignments.

When Vic retired from the Army in 1989, his family returned to Colorado Springs where he began a second career working as a Senior Urban Planner for HiggenbothamiBriggs and Associates and Nakata Planning Group. The work centered on Military Base Planning for Army and Air Force Installations. He finally retired at age 62.

Vic was named 2018 Veteran of the Year by El Paso County Veterans' Services. He was so honored to receive this award and proudly displayed it in our home. He said, "No person receives this honor alone." He was thinking of his committee and all the work that was done. "It's all about the veterans."

On a Thanksgiving night, at the Fort Carson Officers Club, Vic decided to play Bingo. While choosing his Bingo card, he saw Sherry Jean Shields across the table. He often joked that he won a rug and his future bride that night. They were each other's best friends, and they loved and laughed together for over 60 years.

The Funeral Mass will be held at 10:00 a.m. on October 13 at St. Francis of Assisi Catholic Church, 2650 Parish View, Colorado Springs. Vic will be laid to rest with fulI military honors at Pikes Peak National Cemetery at 3:00 on the same day. In lieu of flowers, donations may be sent to Tunnels to Towers, Care and Share, or Wounded Warrior Proiect.

Published by The Gazette from Oct. 11 to Oct. 13, 2021.
To plant trees in memory, please visit the Sympathy Store.
MEMORIAL EVENTS
Oct
13
Funeral Mass
10:00a.m.
St. Francis of Assisi Catholic Church
2650 Parish View, Colorado Springs, CO
Oct
13
Interment
3:00p.m.
Pikes Peak National Cemetery
CO
Funeral services provided by:
Swan-Law Funeral Directors
MAKE A DONATION
Please consider a donation as requested by the family.
MEMORIES & CONDOLENCES
4 Entries
I am sending my deepest condolences to Sherry and the Fernandez family. Vic will ever remain your heart.
Mandi Toutsch
Friend
October 14, 2021
I grew up with Victor in Trinidad, and we both attended Holy Trinity School. He was a wonderful person and we were all delighted with his appointment to West Point. His military career was stellar and he continued to pursue important and meaningful activities following his military retirement. He was a member of "Friends of Historical Trinidad", an organization of which I am president. We recognized him at one of our luncheons. Victor was a gracious and well-liked human being. I was a friend of his Trinidad family and actually roomed with his brother during my first teaching job. Victor will be missed. May he rest in peace!
Jess Gerardi
School
October 14, 2021
Vic was an Outstanding man and was a Veteran that stood to make sure Veterans were recognized for their service and Appreciated for their efforts. A life lived well and worth remembering. We salute you Vic and till we meet again. Cousin Pat
Patrick Sandoval
Family
October 12, 2021
It was my great honor to work with Vic on the Pikes Peak National Cemetery Committee for several years. His targeting was always precise and unwavering. I consider him a great leader and a friend who always gave me the azimuth and elevation corrections I sometimes really needed to get back on target. Thank you sir. I will always remember your message "It's all for the Veterans".
Jack Casey
Friend
October 12, 2021
Showing 1 - 4 of 4 results