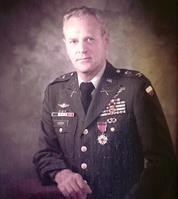 Lee A. Goff, 92, passed on to his Lord and Savior Jesus Christ on September 10, 2021. He was a resident of Colorado Springs for 40 years and born and raised in Tomah, Wisconsin and the son of Wade and Hazel Goff.

He was assigned to the 4th Armored Division in Texas and Germany during the period July 1957 to April 1961. He has served in various command and staff positions, to include instructor in Communications-Electronics (1966-1968) and Leadership, US Army Infantry School (1972-1974), US European Command J-3 Directorate, and as G-3 Advisor, Republic of Vietnam II Corps during the North Vietnamese Easter invasion of 1972. Colonel Goff completed Parachute School in 1961 and was assigned to the 7th Special Forces Group at Fort Bragg and Laos, and later to the 5th Special Forces Group in Vietnam. In 1981, he retired as Colonel after 30 years of service in the Army. Since retiring, he volunteered within the community.

He is a graduate of Tomah High School: University of Nebraska, Omaha: and various service schools, to include the Command and Staff College and United States Army War College.

He met his wife, Gertrude (Trudy) Hoehner in Germany who was assigned as a DoD civilian to the small post in Crailsheim, Germany. They were married on October 1, 1960.

Lee and his wife, Trudy, enjoyed many years of travel to all 50 states, Japan, China, USSR, Europe, South America, and Canada. Lee also enjoyed skiing, collecting, reading and bible study. He was a member of Village 7 Presbyterian Church.

A public memorial service will be held at 10:00 a.m. on Saturday, October 2, 2021 at Village 7 Presbyterian Church. Private family interment will be at Pikes Peak National Cemetery with full military honors.

Memorials in Lee's name may be made to the Evangelical Christian Academy, 4052 Nonchalant Cir. S., Colorado Springs, CO 80917.

Published by The Gazette from Sep. 15 to Sep. 19, 2021.
To plant trees in memory, please visit the Sympathy Store.
MEMORIAL EVENTS
Oct
2
Memorial service
10:00a.m.
Village 7 Presbyterian Church
CO
Funeral services provided by:
Shrine of Remembrance
MAKE A DONATION
MEMORIES & CONDOLENCES
2 Entries
We send our heartfelt sympathies to Trudy and all of the Goff family. We are grateful to have known Colonel Lee who was an active member of our church and church community. We pray for comfort and peace for his family.
Rudy and Gloria Drautz
Friend
September 19, 2021
The Buckley SFB military Retiree Activities Office (RAO) would like to offer our sincere condolences and our gratitude for Colonel Lee A. Goff, service to our country in the US Army. If you would like help with any matters related to casualty assistance, Defense Finance & Accounting Service, Survivor Benefit Plan (SBP), Veterans Affairs (VA), etc. you can contact our office on Buckley SFB at 720-847-6693. The RAO is staffed by volunteers, all military retirees themselves, and our sole purpose is to provide assistance to any military retirees and surviving spouses/family members with anything related to their military service and/or benefits, in particular during difficult times such as this. We are deeply sorry for your loss. Steve Young Lt Col, USAF, Ret Director, Buckley SFB RAO
Debra Paradeis
Other
September 15, 2021
Showing 1 - 2 of 2 results