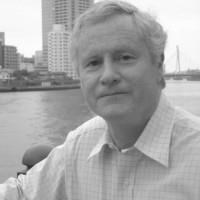 Bob Kerwin's 70 years gave him opportunities to live and learn in countries around the world. Born to a US Foreign Service Officer and his English wife in Istanbul, Turkey, Bob's international experience began with his own family. He was educated at schools in Turkey, England, and the USA, culminating in a degree with high honors from Dartmouth College. After college, Bob took on several odd jobs around the world that included grape picking in France, ski run construction in Switzerland, pub tending in England, fishing in Australia, and cooking for lumber camps in Oregon. After a few years, he returned to school and completed an MBA at the Thunderbird School of International Management, where he was joined by his wife of 40 years, Mary Satre.

Advertising began for him in Chicago and NYC, but given his international interests, an early offer of an advertising job in New Zealand was too enticing to pass up and the Antipodes became home for his family for the next 12 years as he represented clients such as Ford, Kraft, HP, and Procter & Gamble in New Zealand and Australia. Daughter Laura started Bob and Mary on their parenthood journey in Wellington, New Zealand, and she was soon joined by her two brothers, Daniel and Ryan, in Melbourne, Australia.

From there, Bob's career took the family to Hong Kong, England, Korea, and Japan (where he represented clients including Nissan, Adidas, and Häagen-Dazs) before the inevitable college years saw the family settling in Colorado Springs in 2006. Bob, an American by birth, spent several years as a young adult in New Jersey, but had long referred to Colorado as one of America's most unspoiled areas. However, after two years working in the communications department at Colorado College, he returned to work in Japan while the family kept the hearth warm in Colorado. Over his remaining years, he consulted for companies in Papua New Guinea, Malaysia, Baghdad—and even Aberystwyth University in Wales.

In addition to work and international adventures, Bob's greatest joy came from spending time with his family. No matter where his job took him, his first priority was always his children. They had pets to love in every country, some of whom were accomplished world travelers themselves. He learned Turkish cooking from his sister, which became a focal point of family holiday meals. Nothing could compare to his hand-tossed aerial-flipped omelets. He had an artistic eye for the garden and truly loved getting his hands in the dirt.

Oftentimes in his career he would go on ahead to scope out a new area and establish a home base for the family. He has once more gone on ahead of the rest of us, peacefully taking his leave at home surrounded by Mary, Laura and her husband Alex Dünki, Daniel, and Ryan.

A Celebration of Life will be held virtually on January 22nd to enable Bob's family to connect with relatives, friends and colleagues as much as possible. Those wishing to make a gift in Bob's honor may do so to the Cheyenne Mountain Zoo in Colorado Springs, the Humane Society of the Pike's Peak Region, or another charity of their choice.
Published by The Gazette on Jan. 9, 2022.
To plant trees in memory, please visit the Sympathy Store.
MEMORIAL EVENTS
To offer your sympathy during this difficult time, you can now have memorial trees planted in a National Forest in memory of your loved one.
MAKE A DONATION
Please consider a donation as requested by the family.
MEMORIES & CONDOLENCES
7 Entries
Dear Mary, This afternoon Susan Cruse & I were able to reconnect & I learned of your husband's passing. I'm so sorry to for your loss. We do not grieve like those who have no hope. We cling to the promise of everlasting life & celebrate the wonderful memories of our lives together. Take time to take care of yourself. Your sister in Christ, Marilyn
Marilyn Dirks
January 20, 2022
Dear Mary, Laura, Daniel and Ryan, We are so very sad to hear of Bob´s passing and our thoughts are with you all as you grapple with your loss. May your family and friends across the world help to carry you through the coming days, weeks, months and more, and may Bob rest in peace in his new heavenly home. With love and care, and thanking you for your friendship The Richards family
Cathy and Neil Richards and family
Friend
January 20, 2022
I was so sorry to see that Bob had passed. He was such a great guy. I always enjoyed talking to him about his adventures. He will be missed.
Jeff Henn
Work
January 18, 2022
Dearest Mary, Laura, Daniel and Ryan, it is with a heavy heart to learn of the passing of dear Bob, a devoted husband, father and friend. I send my sincere condolences to you and family during this time of grief. In our Morning Prayer service this coming Sunday at Yokohama Christ Church, we shall pray for the repose of Bob's soul and extend thoughts and prayers to you all. Bob sent me a wonderful retirement card almost 5 years ago and I still keep it in my desk top drawer. It portrayed such a caring, warm and gregarious man and he will certainly be missed. It was always a delight to be in his company. And now, he is in his true home in God's heavenly kingdom. May he rest in peace. Thinking of you all, God Bless, Dennis
Dennis Stanworth
Friend
January 17, 2022
Dear Mary, Laura, Ryan and Daniel It was sad to hear that Bob has passed away. May God bless you and your family in this time of sorrow. I have very good memories of being together with Bob some days in Colorado Springs three years ago. Ivar
Ivar Sætre
Family
January 15, 2022
Heartfelt condolences Mary, Laura, Ryan, Daniel & all your family. Thinking of you at this sad time, with prayers & lots of love Xx
Suzanne & Peter Gaywood, & family
January 15, 2022
Dear Mary, Laura, Ryan and Daniel Feeling far away right now in one of your many homelands New Zealand. Thinking of you all with memories together in Wellington - Seatoun, Owhiro Bay, and Devonport in Auckland. Somehow red socks come to mind. Bob you were one in a million and will be missed but not forgotten. Forever friends and united internationally. love Fiona
Fiona Ritchie
Family
January 15, 2022
Showing 1 - 7 of 7 results