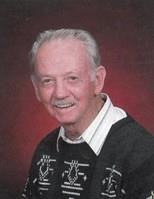 Fred L. Shaw passed away peacefully at home on September 26, 2021, aged 91. He was born in Pittsburgh, Pennsylvania on August 24, 1930, to John and Myrtle Shaw. He served his country as a member of the United States Air Force (1950-1954) and Army (1957-1977) and was a proud Vietnam veteran. He worked in aviation with helicopters and enjoyed sharing his wealth of knowledge with anyone who would listen. He loved his job and would tell wonderful stories about it for the rest of his life. During his time in the military, he was assigned tours in Germany and England, where he would later meet his wife. Fred was introduced to Kathy in Hepworth, England, while he was out riding his motorcycle and they were married shortly after on April 10, 1953. They moved back to the United States together and had two children: Debra, and Bud. He was an outgoing person and volunteered with Good Shepherd United Methodist Church. In his free time, Fred was very active and loved the outdoors. He was a member of the senior softball league, a bowling league, and was an avid golfer, once hitting a hole-in-one at Fort Carson that we would never hear the end of. When he was not playing sports, he was an avid fan of the Steelers and the Broncos, with an occasional Rockies game here and there. Fred was a beloved husband, father, and grandfather who loved his family and his country. He is survived by his wife, Kathy, his daughter Debra (Darell Zachary), his son Bud and his granddaughter Ashley. He will be dearly missed by everyone who had the pleasure of knowing him. He was preceded in death by his mother, father, and five siblings. We know he missed them dearly and was happily reunited.

Published by The Gazette from Oct. 8 to Oct. 10, 2021.
To plant trees in memory, please visit the Sympathy Store.
MEMORIAL EVENTS
To offer your sympathy during this difficult time, you can now have memorial trees planted in a National Forest in memory of your loved one.
Funeral services provided by:
Shrine of Remembrance
MAKE A DONATION
Please consider a donation as requested by the family.
MEMORIES & CONDOLENCES
1 Entry
Fred was such an amazing man and I am so glad I had the opportunity to work with him and his wife, Kathy. I am sending all my love and prayers and condolences. I will definitely never forget him!
Patricia Johnson
October 12, 2021
Showing 1 - 1 of 1 results